Hawaii , An island of fire and ice.

Indulge your adventure spirit on the biggest island!

Hawaii is heaven on earth. Sheltering the most active volcanoes and tallest sea mountain. Origin of modern day surfing, the hula and hawaii regional cuisine. Hawaii’s most unique feature is its aloha spirit: the warmth of Hawaii’s people that wonderfully complements the Islands’ perfect temperatures.

A little bit about the islands…

The age old question we are asked by friends and family who plan on visiting Hawaii for the first time: “What island should we visit?”

We want to give the best advice and with everyone having different personalities and vacation styles, it can be difficult to answer. So, we decided to make a dedicated post that give the pros and cons of each island! Things to look for, what activies you can experience whether historical, natural, or manmade. There are 8 main islands in the Hawaiian island chain.  Oahu, Maui, Kaua’i, and Hawai’i Island (AKA Big Island). This leaves us with Lanaʻi, Moloka’i, Ni’ihau, and Kaho’olawe. Let’s start off with youngest and biggest island first and we’ll move our way to the Northwest, i.e. the older ones. The island where the state gets its name from: HAWAI’I (Hawaii Island, Big Island)

It is the only main Hawaiian island with active volcanoes. It is home to Kilauea, one of the world’s most active volcanoes in the world, and Mauna Loa. They both have observatories which you can visit to learn more.

The picture above is an amazing sight to behold,this island is the biggest island of the Hawaiian island chain. It has deserts, snow peaks, volcanoes, and a rainy/wet side. There are many landscape changes as you tour the island. From any water recreational activity, to horseback riding in the famous town of Kamuela, Hawai’i island has it all. It is very country yet maintains the perfect amount of city. It also has a vast forest with many different species scurrying about in its depths. Visit the world famous black sand beaches or visit (and snowboard) the world’s tallest mountain (from the ocean’s bottom) Mauna Kea. Surf and snowboard in one day! The Big Island can be as ‘big’ and adventurous as you want it to be; providing the perfect balance of outdoor/exploration and city (night)life. 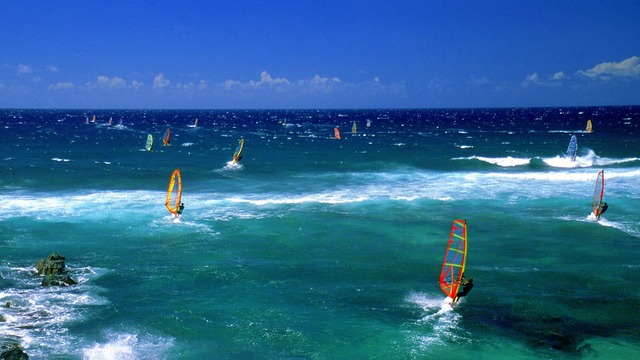 Known as a popular getaway island for many celebrities, Maui was developed for premium relaxation and romantic stays. This island draws a certain peace that other islands do not. From my experience, it has tourism and all the activities you want but the nature aspect as well because the raw beauty is still abundant. If you feel your social bug biting, a populous town is no more than a 15-30 minute drive away from a reclusive beach – and if you’re trying to escape from the busy tourist world, a peaceful spot is also no more than a 30 minute drive away!

Maui is known as “The Valley Isle” because on one end lies Mauna Kahalawai (in the west) and on the other, the famous Haleakala summit (in the east). Tip: A romantic moment that will forever live in your significant other’s memory is a sunrise or sunset viewing on top of Haleakala!

Romanticism is easy to find here. Another top thing to do is whale-watching. Maui is known to have the best whale viewing out of all the islands! (Whale-watching season is between late December to early May.) Although all the islands have the same variety of water activities, Maui also has the best windsurfing, kite-surfing, and kite-boarding spots. For one, it’s less crowded but it has clear water and white sand beaches. Many other islands have inaccessible, rocky or over crowded beaches – thus making it a perfect location for such enthusiasts.

Apart from the overcrowded beaches and the terrible traffic, it’s an awesome place to live! But really…If you visit Hawaii, do visit Oahu because of historical significance, i.e. Pearl Harbor, Waikiki, and Diamond head. Other than that, we recommend visiting other islands as there is much more natural beauty there. Don’t get us wrong, Oahu has everything you want in recreational activities, city life, beautiful landscapes, and outdoor adventures. However, keep in mind that there are almost one million residents on Oahu and with tourism year round brings that number to over one million. This means that there is very little to no exclusive beaches, unless you own beach front property that’s fenced off.

The eldest island of the main Hawaiian Island chain. It is best known for being the mini Grand Canyon or Grand Canyon of The Pacific. The landscape and views are forever picture worthy no matter what weather you find yourself in. The NaPali coastline has to be the most beautiful coastline in the United States (our opinion). Fun fact: many, if not most, movies “filmed in Hawaii” are filmed on Kauai. Flights from the United States mainland and (believe it or not) Vancouver, Canada are available. Kauai has amazing hikes to trek as well and encompasses Hawaii’s beauty than any other island. Although, to be fair, each island does have its own uniqueness.

From what we hear and read about this island, it’s peaceful and known as the “Friendly Island”, the actual nickname, of the island. Someone said “For one it’s like going to a different state. It’s nothing like the other islands. It’s rural and country. The people are so sweet and really epitomizes the Aloha spirit. The untouched beauty of the island is breathtaking and it seems like everyone knows everyone. There’s a saying that they say, something like “Don’t try and change Molokai, let Molokai change you.”

Wow. If that doesn’t convince you that it’s one of the best places in Hawaii to visit, I don’t know what else can! As for accommodations, only one hotel is on the island with it being made only in 2014; it’s best to rent a condo/house or stay with people you know. It’s such a small community, there is only one middle school, high school, and community college, so if you choose to visit this island please show the utmost respect as they will show the true meaning of unconditional Aloha. A very simplistic life is to be found here. No traffic lights and only one elementary school serve the entire island. There are two resorts on the island and both are under Four Seasons Hotels. As far as “country” goes and complete, natural beauty, Lana’i is should be your primary choice to visit. Many tourists do not get around to visiting Lana’i as there are better accommodations on the other major islands (Hawaii, Maui, Kauai, and Oahu). Between Ni’ihau and Lana’i, we are unfortunately unable to say much about it as there is not much information. This only means we must visit it….SOON! Possibly our next island to visit? Please feel free to email us or leave a comment if you’ve experienced the beauty and rawness of this island!

Not much can be said about this island. Only Hawaiians live here (about 200 people), the native Hawaiian language is the designated language spoken on the island, and only special visitors that are invited, government officials, or family members that own the island are allowed here – giving it the nickname “The Forbidden Isle”.

Okay, you can’t actually visit this island for “fun”. It’s mostly used for government officials, school, and other forms of studies. We wanted to include it as it’s one of the eight island that make Hawaii. It is important not only in the State’s history but the United States history: during World War II, all the way up until 1990 it was used as a ammunition testing and accuracy practice grounds. The U.S. Military used live ammunition and bombed the shit out of the island for 40+ years! It has always been sparsely populated though because of the immediate high elevation from shores to the cliffs, disabling easy access to fresh water throughout the island. The entire island is now a nature reserve and efforts are continuously being made to clear the island of the debris and leftover shells. Maybe one day it will be open to the public, or a billionaire will buy it and have a five star resort built on it (which many locals, including us, think it should stay preserved), but who knows!

Common Beliefs we Often get Wrong

Explore Some Beautiful Cities Around the World in this Summer

Reasons why you should head to Srilanka right now!

5 of the Most Stunning Hotel Resorts in Maldives

Hill Stations to Visit in India